Jason is a native Utahn, successful entrepreneur, husband, father of two, and a patriot. He was born and raised in Orem, Utah. Jason learned firsthand about the power of the individual, through his hard work but also through his mistakes. Jason struggled as a kid being raised in a broken home, but through his faith he pulled himself up by his bootstraps to serve a mission for his church, and then graduated from BYU with a degree in education. He enjoys spending time with his blended family with two daughters and wife Alexia, who alongside him, are three of the strongest patriots you’ll ever meet.

Jason currently works with business leaders across Utah for the National Write Your Congressman organization to get them involved in politics, regardless of political party, and to fight to get the government out of their way. For the last six years, he’s met with over 5,000 business owners about their frustrations with government. He consistently reminds his clients and neighbors that members of Congress work for us, and we have a responsibility to hold them accountable. Jason will ensure he is accessible and available to the people of Utah as he prepares to serve and represent them in DC.

He built one of the biggest cycling races in the country from the ground up, into an international multi-day road cycling race across Utah. An entrepreneur at heart, Jason capitalized on his love for the outdoors and can-do spirit by founding The Tour of Utah cycling race in 2005. He later sold The Tour to Larry H. Miller in 2007.

Aside from being passionate about liberty, Jason competed nationally in mountain biking, road cycling, and bodybuilding. His latest passion is MMA fighting.

Jason’s fighting for the people of Utah’s 3rd Congressional District. Join Jason today because WE THE PEOPLE are ready to stand up and give America a fighting chance.

From rock bottom to running for congress.
Jason and Alexia’s story.

Click or tap the player Below for the podcast.

With thanks to the Podcast team at FreedomSHIFT, find them by tapping or clicking their logo…

Where does Jason stand on the issues?
KTALK Radio, Talk with Jon, asks the hard questions:

With thanks to the Talk With Jon Podcast team at KTALK Media, find them by tapping or clicking their logo…

What and Where is Utah Congressional District 3? 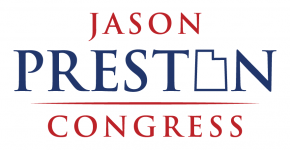